Pete Ward was a professional ball player with 8 years in the majors from 62-70 when his playing days were over he started a baseball clinic hosted at Lewis & Clark College in Portland, Oregon.  He used his contacts in the majors to get some major league players to attend to help the kids learn the game.  In 1974 he issued a set for the kids it was 6 1/4 x 8 printed on thin paper they are very rare today as very limited distribution and very poor stock.  Checklisted below is 6 it is believed to be complete. 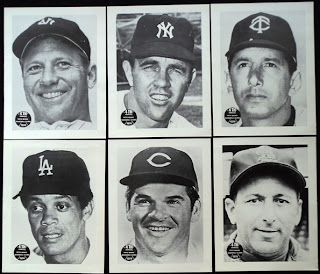 Posted by sschauer at 9:04 AM No comments:

Continuing the tradition the Reds issued another 12 player pack this one is the easiest to identify as it is the only year where they put Cincinnati Reds next to the names instead of the usual Reds.  It was originally issued through the mail or ball park in a envelope with a clear cellophane window. 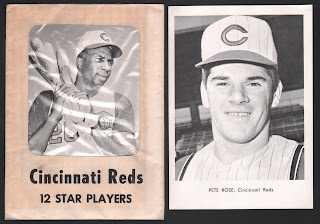 Posted by sschauer at 8:42 AM No comments:

This one is not something I usually pounce on but clearly the 1981 set was either printed in 2 locations or had 2 runs probably the later.  If you notice they come in a dark blue border or a lighter blue border the lighter blue seems the rarer of the two but I've never seen any premium on them.  You can also notice on the front the stars on the top and the lettering - the darker blue has more of a 3-d effect an extra white shadow line while the lighter blue does not.

I doubt anyone beside super hard core collectors care about this but I think it worthy enough to post. 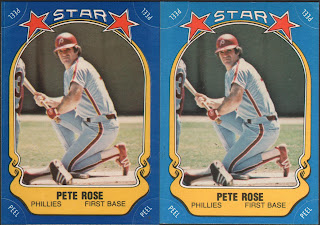 Posted by sschauer at 8:44 PM No comments: