A continuation from 1983 set it was also issued in 3 card strips each week in the newspaper and contained players from all sports and college athletes.

This 1984 checklist was compiled by Kevin O'Conner at http://www.calripkenjr.net/ he got the microfilm from Wichita and went through and cataloged each one. 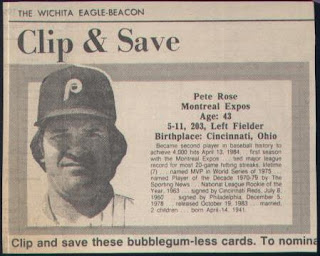 Checklist in PDF format
Posted by sschauer at 7:30 AM No comments: 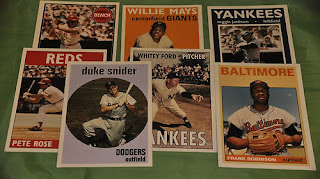 Came across this lot which I believe is complete set but not 100% sure of it but for now closest to full set I've seen.  This set measures 4 1/4 x 6 and and the reverse says will be at Bally's Las Vegas November 14, 1998 so I'm assuming there was a large card / autograph show at the casino that day and these were promos made before that to promote it, but I don't know how they were distributed anyone attend the show or was a guest of the casino back then and can shed light on the subject please comment below.  They are pretty rare to see and don't pop up that often.

Just a small back story  I found interesting -

Shortly after his Hall of Fame election, Mays took a job at the Park Place Casino (now Bally's Atlantic City) in Atlantic City, New Jersey. While there, he served as a Special Assistant to the Casino's President and as a greeter. Hall of Famer Mickey Mantle was also a greeter during that time. When Baseball Commissioner Bowie Kuhn heard of this, he suspended both men from involvement in organized baseball for violating the league's rules on gambling. Peter Ueberroth, Kuhn's successor, lifted the suspension in 1985.

Obviously by 1998 the casino stigma was not as strict with ball players.

The checklist below they are unnumbered 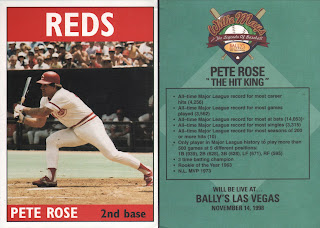 Posted by sschauer at 7:10 AM No comments: