This set is partially cataloged and I can add a few more pieces to it but I still need some holes filled in it.  I was a promotion by Uniroyal Keds a tire manufacturer similar to a Goodyear tire store today.  They lightly advertised free scrapbook and strip of cards if you come to their store.  I say lightly because looking at past newspapers their ad appeared just 3 times over a month period not exactly front page either. 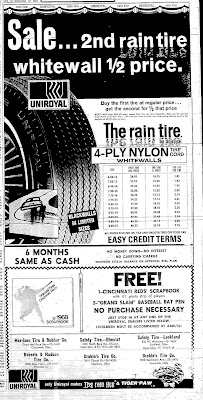 Now when you went in you got strip 1 which contained 5 players and and end tab where you had to cut off and bring to Crosley Field on certain days to get the other 3 strips.

This strip contains most of the cards known to the set with Pete Rose and Lee May being the other 2 known cards.  Recently I found a lot and can add a few more to the mix. 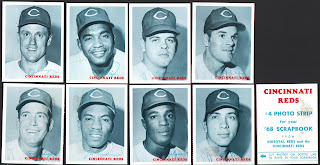 This set was issued on very thin paper and not hard to imagine if missed first strip you'd never get the others plus getting to the ball park on certain days with the coupon for next strip seemed difficult then to add to that had to make it through a game with the strip intact seems to add to the extreme rarity of this set.

I believe the other strips only contained 4 players to the strip which means total set should contain 17  I also think the layout of the strips goes as following based solely on the cut lines when I line them backup - It is interesting to note that the Johnny Bench is from his rookie year and issued before his topps late series card.  Anyone with complete strip scans or other cards would like to see them and add/refine the list below.